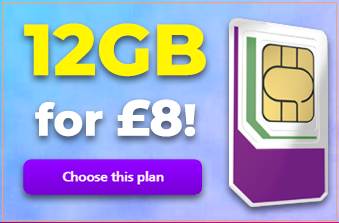 Three is offering customers 12GB data with unlimited UK minutes and texts for just £8 a month! The deal is a 12-month contract. There are no data or speed caps.

With this Half Cooked Exclusive Deal you also get 5G at no extra cost as well as access to Go Roam. Click through to ensure you don’t miss out!

Major mobile network operators in the UK are constantly improving both their population coverage and landmass coverage, however there are still plenty of black spots where you just don’t get any reception at all. Along with 4G Calling (VoLTE), Wi-Fi Calling aims to get rid of these black spots and improve your call experience.

So what is Wi-Fi calling?

Wi-Fi Calling is a technology which allows a smartphone user to make and receive calls over a wireless internet connection rather than a regular cellular connection. However, both your network operator and your handset should be compatible in order for you to benefit from this feature.

Three’s perk is available to all customers, regardless of the plan they choose. With this feature turned on Three will keep you connected by using your available Wi-Fi connection even if there’s no mobile signal. We rate Three’s Wi-Fi Calling as the best in the UK, because you’ll be charged in the same way as normal and you don’t have to be on a premium plan to benefit from it. Plus the feature works with both calls and texts and the experience is seamless, so your calls won’t drop in the middle of a conversation.

The feature works right out of the box as long as your mobile device is compatible with the scheme.

Vodafone’s lets you make calls anywhere you have access to a Wi-Fi connection, even if you don’t have any phone signal. It’s a seamless experience for Vodafone customers as there are no cut offs switching between your regular coverage and Wi-Fi Calling.

Out of the four major mobile network operators in the UK, Vodafone can come across restrictive when it comes to Wi-Fi Calling. You’ll need a Pay Monthly Unlimited, Red or Red Entertainment plan as well as a compatible handset to get Vodafone’s Wi-Fi Calling. The network strongly suggests purchasing the handset directly from a Vodafone store, or else the feature may not work even if your phone is in the supported devices list. Vodafone Basics plans are also excluded, even though they lock your in for a whole year. You don’t need an app for the network’s Wi-Fi Calling to work. Unfortunately, the carriers scheme only works with voice calls, text messages aren’t supported at the moment.

When using Vodafone’s Wi-Fi Calling; calls come out of your monthly allowance, so there are no extra costs.

Have A look At O2’s Wi-Fi Calling

O2’s Wi-Fi Calling feature works perfectly, though the carrier suggests purchasing Android devices directly from their stores to avoid potential issues with the scheme. However, user experiences tell us that devices bought from manufacturers work just fine. While the feature works right away on compatible Apple phones (if you have it turned on), Android devices require you to go into your O2 account and manually turn Wi-Fi Calling on.

The feature works hand in hand with 4G Calling and the experience feels seamless. This means your calls won’t drop even if you get no phone signal as long as you have access to these perks. O2 has thousands of Wi-Fi hotspots and on top of that has a special feature called O2 WiFi which enhances your calls whenever you’re in one of the supported areas.

O2 Wi-Fi Calling is not available to PAYG customers and it’s limited to voice calls only. There’s no charge to your regular bill when you use O2’s Wi-Fi Calling.

With EE’s Wi-Fi Calling you can both call and text when there’s no phone signal available. Of course you’ll need to be connected to a Wi-Fi hotspot and your device should support the feature.

You’ll be charged at the same rate as you usually would be for using EE’s network, so there are no extra costs.

BT Mobile is one of the few mobile virtual network operators that supports Wi-Fi Calling and the network does it right. At Half Cooked, we think BT Mobile is the best MVNO with Wi-Fi Calling.

BT Mobile is powered by EE, so the operator has the best network coverage in the country. BT’s Wi-Fi calling doesn’t require any extra apps to work. Simply put your SIM in a Wi-Fi Calling ready handset and it will start working. You can send and receive both voice calls and text messages with BT Mobile’s Wi-Fi Calling. Given how BT has millions of Wi-Fi hotspots in the UK, even if you don’t get a phone signal you’ll most likely be covered.

All BT Mobile plans support Wi-Fi calling and the feature comes at no extra cost.

Another MVNO with Wi-Fi calling is iD Mobile. Running on the Three network, iD Mobile lets you make and take calls using a Wi-Fi network. You can also use this perk for sending text messages.

iD Mobile’s Wi-Fi Calling has a long list of supported devices and the network is constantly adding new smartphones. The transition between Wi-Fi Calling, 4G Calling and your regular phone signal is seamless and works great.

The carrier’s Wi-Fi Calling comes out of your monthly allowance of minutes.

Wi-Fi Calling comes as a free feature on all Sky Mobile plans and the network offers support for a decent number of devices, however, many users voiced issues when they use an Android device purchased elsewhere. It’s recommended to purchase your device from Sky Mobile, if you don’t want to take any risks and you use Wi-Fi Calling regularly.

Sky Mobile is powered by the O2 Network.

Piggybacking off EE, Virgin Mobile also offers the best network coverage in the UK. Like the other networks in our list, Virgin Mobile’s Wi-Fi Calling also comes at no extra cost and lets you make and receive calls, even when you don’t get a phone signal. Plus texting is included too.

If your device is compatible and up to date, Virgin Mobile’s Wi-Fi Calling will start working the moment you insert the SIM card into your smartphone. Sadly, Virgin Mobile doesn’t have 4G Calling and normally these two features are a package deal as they complement each other.

All Virgin Mobile deals include Wi-Fi Calling, so you’ll only need a compatible phone for it to work.

Powered by the Three Network, SMARTY offers decent 4G network coverage and data speeds in the UK. SMARTY started offering Wi-Fi Calling at no extra cost as of late November 2020, but 4G Calling is yet to arrive. To benefit from SMARTY's Wi-Fi Calling your device needs to be compatible with the feature.

You can also read our SMARTY Review to discover more about the network. We also covered what SMARTY 5G will be like and how SMARTY's unlimited data plan works.

While all four major mobile network operators allow their customers to benefit from Wi-Fi Calling, most MVNOs skip this feature in order to provide competitive prices and deals.

Some of the most notable mobile virtual networks without Wi-Fi Calling are VOXI, giffgaff, Tesco Mobile and Plusnet. We still recommend you to check them out though, as they offer some other great features like or endless social media & endless video by VOXI.

Which mobile networks in the UK have Wi-Fi Calling?

How do I know if my Wi-Fi Calling works or not?

Wi-Fi calling works automatically on most devices and most UK based mobile networks. However, at times it might not kick in automatically or perhaps for one reason or another the feature might have been turned off on your device. When Wi-Fi Calling is active, you’ll see a special icon or a text at the top of your screen.

Wi-Fi Calling comes at no extra cost, but you must have a compatible device and a price plan for it to work. Wi-Fi Calling will use your regular monthly call allowance.

Can I use Wi-Fi Calling when I’m roaming?

No, all the networks which have Wi-Fi Calling limits the usage of this perk to the UK only. However you can make calls via apps like Facebook Messenger, Skype, WhatsApp etc.

Do I need to download an app for Wi-Fi Calling?

Depends on the network. For example, O2’s Wi-Fi Calling kicks in automatically on supported Apple phones, however for it to work on Android devices you’ll need an app. Most networks don’t require an extra app though.

Does my phone support Wi-Fi Calling?

It depends on which network you’re on. Different mobile network operators have different lists of supported devices. If you have an iPhone 5s or later model, Wi-Fi Calling will likely be available on your phone. As for Android, you’ll have to individually check each network to see if your device is supported.