Home  /  Does SMARTY have Wi-Fi Calling and 4G Calling

Does SMARTY have Wi-Fi Calling and 4G Calling?

Powered by the Three Network, SMARTY offers some of the most competitively priced 4G SIM Only plans, but does SMARTY offer Wi-Fi Calling and 4G Calling? 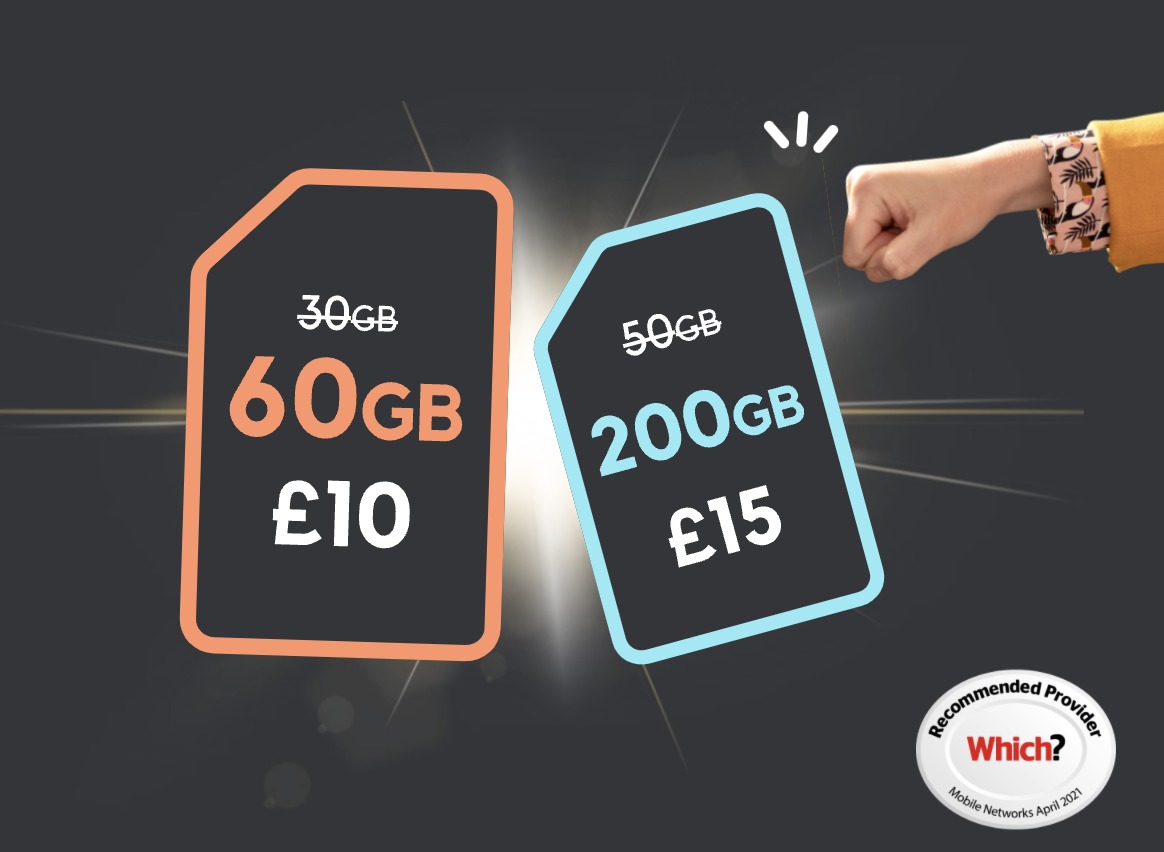 SMARTY is offering a 60GB data plan with unlimited UK texts & minutes + Wi-Fi Calling for just £10/month. This is double their normal data at this price point and it’s only around for a limited time, click through below to take advantage before the deal ends!

SMARTY is a low-cost mobile virtual network operator (MVNO) owned by Three. The carrier is also using Three as its network provider. SMARTY has some of the most wallet-friendly SIM only deals for both heavy data and light data users. All SMARTY plans come with unlimited UK minutes & texts, and also free roaming in the EU.

Being powered by Three, SMARTY can’t offer 2G Coverage as the parent network doesn’t have 2G either. However, SMARTY is offering fast 4G and decent 3G data speeds. Sadly, SMARTY doesn’t have 5G yet, but we expect the network to make the jump soon.

As of November 2020, SMARTY customers can enjoy Wi-Fi Calling at no extra cost, provided their device supports the feature.

With SMARTY Wi-Fi Calling your call quality will be at best 2Mb/second. Your voice call quality can suffer, if your Wi-Fi connection’s download speed is slow.

Since the network doesn’t charge you for this feature -and all plans come with unlimited UK minutes & texts- you won’t pay anything extra when you’re using Wi-Fi Calling. However, you’ll be subject to extra charges, if you’re making international calls or using your plan for premium numbers.

Wi-Fi Calling should work with free public Wi-Fi hotspots, but not all hotspots allow this feature, so you’ll need to check before you attempt to make a call over Wi-Fi.

Android handsets which support Wi-Fi Calling have the feature already set up, but if you’re an iPhone user, you will have to turn it on by yourself from the settings menu. If you’re using an older device you may have to update the software first, or else Wi-Fi Calling may not work.

Unfortunately, SMARTY doesn’t have 4G Calling yet, but we know that the network is working on it and it may arrive very soon.

4G Calling or VoLTE lets you make and take calls over a 4G network rather than using 3G, which means you’ll still have access to superfast 4G download speeds even when you’re on a call. 4G Calling drastically improves your phone’s coverage area and eliminates most indoor blackspots.

On top of that, calls over 4G are a lot clearer, when both parties are using 4G Calling. Most networks offer 4G Calling and Wi-Fi Calling together, and you can move seamlessly between these two voice call quality improving perks.

If you’re happy with Three’s network coverage, but want to benefit from both 4G Calling & Wi-Fi Calling we recommend checking out iD Mobile. The carrier offers them both at no extra cost, if you sign up for a pay monthly plan. You can read our iD Mobile Review to discover more about their offers.

The parent network, Three also offers both these features for free, and all their customers are eligible, even traditional PAYG users. Have a look at our Three Review to see what makes them a unique network. With Three you’ll also get the fastest 5G data speeds in the UK.

Since SMARTY is powered by Three, both networks offer identical 4G & 3G coverage and data speeds. SMARTY itself isn’t tested by independent bodies, but you can be sure the results would be the same, since Three doesn’t enforce any speed caps.

When it comes to 4G population coverage, Three & SMARTY are just as good as any other mobile network provider in the country, but UK geographical coverage is more important and they’re lagging behind their competitors. We’d like to underline that SMARTY doesn’t offer a 2G service, so if your device only supports 2G, it won’t work with a SMARTY SIM.

SMARTY’s average 4G download speeds are pretty good. When we look at Open Signal’s October 2020 test results, we see Three ranking as the third fastest 4G network, almost on par with Vodafone. The network’s average 4G download speeds are around 22Mbps and their upload speeds are around 8Mbps.These speeds are more than enough to stream full HD content on Netflix, YouTube, Prime Video, Disney + and other video streaming services. However, we can’t recommend SMARTY for competitive mobile gaming. Three’s latency is already higher than other networks, and MVNOs have higher latencies. Plus, 4G isn’t ideal for competitive gaming, as it can be unreliable, especially during peak periods.

At the time of writing, SMARTY doesn’t offer 5G. We don’t know when it will be launched, but we know that they’ve been testing and the results seem promising.

What we know for sure is SMARTY will be using Three’s 5G network, when the service is ready to launch. Three is the fastest 5G network and they also have the most 5G spectrum in the UK. All Three customers get 5G for free, provided their phones are compatible with the technology and they are in an area with the carrier’s 5G network.

You can read our SMARTY 5G article to discover more about the topic. We believe, SMARTY will be a great choice and offer some of the best 5G SIM only plans in the UK. In fact, we expect SMARTY’s unlimited data plan to be competitively priced, even after getting 5G.

If you have Wi-Fi Calling your overall voice call quality will significantly improve, which means SMARTY customers can enjoy higher quality calls than some other MVNO users. However, when we look at the voice call quality test results without the additional help from Wi-Fi Calling, we can see Three and SMARTY rank last with a score of ‘sufficient’. According to umlaut and Open Signal, Three’s call setup times are considerably longer than EE, Vodafone and O2.

O2 has been making huge improvements in this area and we recommend checking out our O2 Review to see how far the network has come.

We think SMARTY is a great choice for tethering, especially given how the network’s unlimited data plan is usually the cheapest on the market.

When you’re tethering, you’re turning your handset into a mobile hotspot, allowing other compatible devices to use your mobile data. It’s recommended to have a heavy data plan or an unlimited data plan, if you’re planning to tether on a regular basis. This burns through your data allowance at a much faster rate and the more devices you have connected, the faster your allowance will drain.

Unlike some major networks, SMARTY doesn’t limit how many devices you can tether to, but there is a fair usage limit of 1,000GB (1TB) per month.

1TB of data is quite a lot and it’s unlikely that you can burn through this much data in 30 days. Another good alternative powered by Three is Superdrug Mobile. They charge about the same as SMARTY for unlimited data. Superdrug Mobile doesn’t have a fair use limit so you can tether as much as you want without having to worry about how much data you’ve spent. You can read our Superdrug Mobile Review to see what other perks they offer to their customers.

You can use your SMARTY plan anywhere in 34 countries across the EU. While there are no limits to how many calls you can make or texts you can send, data usage is subject to a fair usage policy.

SMARTY offers free roaming in 34 countries across the EU, but the network doesn’t have any special add-ons or a premium roaming deal. Which means you’re quite limited and there are no extras.

Travelling outside the EU, SMARTY SIMs work like an old school pay as you go service. You’ll have to purchase an “Out of plan” add-on and pay for what you use, nothing more. If you still have data left from your add-on after 30 calendar days, you can put that money towards your next bill.

SMARTY’s fair usage limit when you’re roaming is capped at 20GB, with surcharges applicable if you go above it.

For frequent travellers, we suggest checking out Vodafone and their premium SIM only deals. The network has the most inclusive roaming destinations and you get many extra perks. You can read our Vodafone Review to see in which countries you can use your UK allowances as a Vodafone customer.

SMARTY doesn’t offer any exclusive free Wi-Fi hotspots to their customers, but they can benefit from O2 Wi-Fi and Sky Mobile’s The Cloud service. These two services are available to all mobile customers in the UK for free. All you have to do is sign up for the service and start enjoying free Wi-Fi.

Wi-Fi Calling should work with these services, but experiences may differ as SMARTY’s Wi-Fi Calling is quite new.

Overall, it’s a good service to have and we hope 4G Calling will be available soon too.

Does SMARTY have 5G SIM only plans?

No, SMARTY doesn’t have 5G yet, but we believe the network will launch their 5G service soon.

Does SMARTY have VoLTE (4G Calling)?

No, VoLTE or 4G Calling isn’t yet available for SMARTY customers, but the network is testing the feature and we expect it to arrive soon.

How can I get Wi-Fi Calling?

If your handset is an android and it supports Wi-Fi Calling, it should work on its own. You may need to update your device to the latest software first. iPhone users must go to their device settings menu and enable Wi-Fi Calling manually.

Does SMARTY have a phone store?

No, SMARTY doesn’t sell any phones or tablets, at least at the time of writing. If the network starts selling devices, we’ll update this section.

Does SMARTY have a mobile app?

No, SMARTY doesn’t have a mobile app, but their website functions like one. You can control everything you need to from your dashboard.