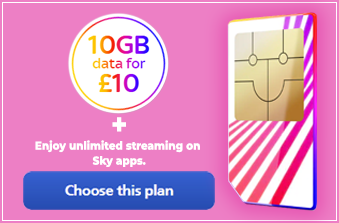 Sky Mobile is offering 10GB of data for only £10/month right now. Plus, you can enjoy unlimited streaming on Sky apps without using your regular data allowance. Hurry up and get this deal before it’s gone!

We love Sky Mobile for a multitude of reasons, and Sky Watch is one of them. Sky Mobile customers with Sky TV can enjoy unlimited streaming of Sky channels without it draining their mobile data allowance.

Simply put, this means you can watch movies, TV shows and other content on the go without having to worry about going over your monthly data cap. Plus, you also get Sky Go Extra at no additional cost. You can just download on demand programmes and watch them whenever you want.

You can still benefit from Sky Mobile Watch if you only have a Sky Mobile SIM and don’t have Sky TV. In this case, you are still allowed to watch content from Sky apps that don’t require a subscription without burning through your mobile data.

Discover All About Sky Mobile Watch

There are multiple ways to top up your data on Sky Mobile. The network offers the best data rollover scheme in the UK. Any leftover data you have will be added to your Sky Piggybank automatically. The leftover data will be available for up to three years, and you can withdraw from your Piggybank whenever you want. The other two alternatives are switching to a new mobile plan with more data allowance or buying Sky Mobile’s 1GB data add-on.

Get a Sky Mobile SIM and Start Data-Free Streaming

How to Use Sky Mobile Watch?

You don’t have to do anything besides downloading the Sky Go app on your mobile phone and signing in with your Sky iD. After that, you can simply start watching content on any Sky app without burning through your data. It’s really that simple.

Some Sky apps may show as using mobile data in your device settings. This is because the app will actually use your regular data, when you stream on demand content which contains advertising. The network says 3 minutes of ads watched on a Sky app uses approximately 30MB of data. If you’re a light mobile data user, on a smaller data plan you may want to watch your allowance a little more closely.

The list below explains which adverts will use your data and which won’t.

Sky Go: Pre-roll adverts before a live or on demand stream starts and adverts during video on demand content will use your regular data. However, adverts during a live stream won’t use your data. These are the ones you’d see if you’re watching Sky on your TV.

Sky Sports and Sky News: Adverts on web pages and adverts before video on demand content starts will use your regular mobile data.

This is a common question among Sky Mobile customers, but sadly, the answer to this question is a simple no. Sky Mobile Watch only covers the content that sits within Sky apps. Streaming services such as Netflix, YouTube, Disney +, Amazon Prime Video and Spotify have their own apps. They don’t belong to Sky.

This means any data used to stream content on Netflix, Prime Video, Spotify and other third party apps will still come out of your allowance. If you wish to stream videos and music on these services, we’d recommend a heavy data plan, or even an unlimited data plan if you don’t want to worry about going over your monthly cap. Sadly, Sky Mobile doesn’t offer any unlimited data options. Having said that, many other UK mobile networks do. For example; the cheapest unlimited data plan in the UK is offered by Three; and it’s priced at £16/month. The deal comes with 4G Calling, Wi-Fi Calling, 5G at no extra cost and Three Go Roam which allows you to use your UK allowances in 71 other countries.

Powered by Three, SMARTY also has an unlimited data plan, but it only offers 4G and 3G download speeds, and there’s a 1000GB data cap. It’s quite a lot to burn through, but Three’s offer is truly unlimited.

Get Unlimited Data for Just £16 a Month

Can I Use Sky Watch Abroad?

There are no prepaid deals available on Sky Mobile and the network doesn’t offer a pay as you go service. This means you must pass a credit check, in order to join the network. At the moment all of Sky Mobile’s SIM only deals are 12-month contracts. Alternatively, you can check out Sky Mobile Swap, if you want to get a handset bundled with a tariff.

Most Sky Mobile offers are competitively priced and they offer great value. You can switch between any available plans once per month, so you have some flexibility. On top of that, all their offers include VoLTE and Wi-Fi Calling at no additional cost. Existing Sky TV and Broadband customers can enjoy even more benefits and perks. We also recommend checking out Sky Broadband offers. You can also get additional lines under your main account and turn it into a family mobile plan and enjoy special deals and discounts. Plus you can move around extra data between plans, provided you have some leftover data in your Sky Piggybank.

Sky Mobile SIM only plans come with 5G at no extra cost, but you must either join the network’s loyalty programme, dubbed as Sky VIP or buy the 5G add-on priced at £5/month. The former option costs nothing, but you’ll have to remain a Sky VIP member for the duration of your contract, there’s no way out of it.

Sky Mobile piggyback on the O2 Network, and the carrier offers identical network coverage and data speeds to its parent network. This includes 5G coverage too, but you’ll need a 5G smartphone to enjoy superfast download speeds offered by Sky Mobile.

Since Sky Mobile is a mobile virtual network operator and they aren’t specifically tested by independent organisations such Open Signal or OOKLA, we’ll have to look at how O2 performs. Don’t worry though, both networks offer almost the same network coverage and data speeds. There’s no meaningful difference for the end user at all.

O2’s 4G, 3G and 2G population coverage is well above 99% at this point, and the carrier offers over 90% UK geographical coverage too. Their 4G coverage is behind the likes of EE and Vodafone (and their MVNOs), but they’re considerably ahead of Three.

If you want the best 4G can offer in the UK, make sure to read our extensive EE Review. The network has the most UK 4G coverage, and the fastest 4G speeds. They also give 6 months of free Apple Music when you sign up for a pay monthly deal.

Sky Mobile’s 5G service launched on January 16th, 2020. They’re once again using O2 as their provider to offer 5G data speeds to their customers. Sky Mobile 5G is available to Sky VIP customers at no extra cost, but if you don’t want to be a member, you can simply purchase their 5G add-on for £5 a month. Keep in mind that having a 5G ready handset and a 5G SIM doesn’t mean you’ll get superfast 5G download speeds at all times. The network’s 5G service is live in 150 cities and towns, but even then, it’s only available in more popular areas rather than the whole city/town.

O2/Sky Mobile have the second most 5G coverage in the UK and they also offer the second fastest 5G download speeds, averaging around 175Mbps.

Sky Mobile Watch is a great feature, especially if you’re already an existing Sky TV customer. Even if you’re not, you still can watch a lot of content on Sky apps without having to worry about going over your data cap.

The only downside is you’ll burn through your regular data when watching some of the adverts on the app, but this shouldn’t be much of a concern if you have enough data in your plan. It’s also great that you can withdraw data from your Sky Piggybank and reactivate the feature, if you ever go below the limit. Overall, we rate this feature very highly.