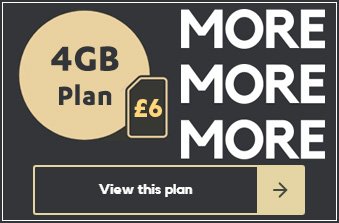 SMARTY is offering a 4GB data plan with unlimited UK texts & minutes + Wi-Fi Calling for just £6/month. This is the most amount of data you can get for just £6 a month!

SMARTY is a very popular mobile virtual network operator (MVNO) among mobile customers that are primarily looking for cheap SIM only deals with no contract commitment. SMARTY is owned and powered by Three, so the MVNO piggybacks on the Three network to provide 4G and 3G coverage, with 5G on it’s way.

SMARTY offers 30-day rolling SIM only deals that come with unlimited UK minutes & texts, and some of their plans come with large data allowances. SMARTY’s big data plans are competitively priced, in fact we can objectively say they offer the most data per pound on average vs. the rest of the market (Outside of any limited discount periods).

SMARTY keeps things simple. There are no fancy extras besides Wi-Fi Calling (sadly, no 4G Calling yet) and of course, their data discount scheme. SMARTY are also aiming to launch a mobile app soon, but they haven’t announced a date yet.

In this article, we’ll take an in-depth look at SMARTY’s Big Data Plans and breakdown what they offer. We’ll also cover the network’s coverage & data speeds.

SMARTY’s big data plans start from 30GB, however, the network also offers a 10GB tariff for medium data users which we’ll also cover in this section.

All of SMARTY’s big data plans come with the same perks and features. This means whichever big data plan you pick you’ll get unlimited UK calls & texts, Wi-Fi Calling provided your smartphone supports it, tethering and free roaming in the EU.

You can create or join a SMARTY Group and benefit from a 10% discount when you choose a big data plan. As you can guess, SMARTY’s money back feature isn’t available to big data customers. There’s no data rollover scheme when you go with a big data plan, you won’t get a second chance to use your leftover data.

Since all SMARTY plans work on a prepaid basis, there are no credit checks to pass to join the network. This means you can upgrade or downgrade your mobile plan anytime you want, or switch to a new mobile network without having to pay a penalty fee.

Also keep an eye out for discounts. SMARTY regularly offers valuable discounts on their big data plans and you can keep the discounted price going forwards as look as you have set your account to auto-renew.

This is the ideal SIM only plan for SMARTY customers who are looking to spend less than £10 a month on their airtime bill. You get 10GB of 4G & 3G data, which is more than enough for an average mobile user.

If you’re going to watch videos on YouTube or stream content on apps such as Netflix, Prime & Disney + on a regular basis, we recommend opting for a tariff with a larger data bundle.

This plan hits the sweet spot for most mobile users. You get 30GB of data, which is about three times more than what an average mobile data user in the UK spends. It’s enough to stream high quality videos on a daily basis, provided you’re not binging content day and night. However, if you’re planning to tether to other devices regularly or planning to stream 4K videos often, this plan probably won’t be enough for you.

SMARTY’s 50GB Plan is ideal for mobile customers that spend a lot of time on their phones streaming high quality video and music content. You can share your mobile data with others a little more freely compared to lesser plans as you get more data, but we still don’t recommend tethering without caution.

SMARTY’s unlimited data plan isn’t truly unlimited. The network enforces a fair usage limit of 1TB (1000GB). It may not be limitless, but you should still be okay, even if you’re tethering to multiple devices on a regular basis.

This plan is ideal for mobile customers who are on their phone all the time, using their mobile data for 4K streaming, or binge watching series. You won’t have to worry about how much data you use with this plan.

SMARTY doesn’t have a 2G service, this means 2G only smartphones won’t work with a SMARTY SIM. This is because SMARTY’s parent network Three doesn’t have it. It’s the same for all the other Three powered mobile virtual networks such as Superdrug and iD Mobile.

SMARTY offers identical 4G & 3G coverage as Three; the same applies to data speeds. Three doesn’t enforce a speed limit to its MVNOs so as a SMARTY customer you should get unrestricted 4G data speeds. SMARTY will always provide the fastest download and upload speeds available, but your speeds will be slower during prime usage times.

Three customers can benefit from voice call quality improving services such as 4G Calling (a.k.a VoLTE or Super-Voice) and Wi-Fi Calling at no extra cost to close the gap, but unfortunately 4G Calling isn’t available to SMARTY customers, however, they can still use Wi-Fi Calling for free if their devices support the feature. In any case, you should use SMARTY’s coverage checker to ensure your frequent areas are covered. 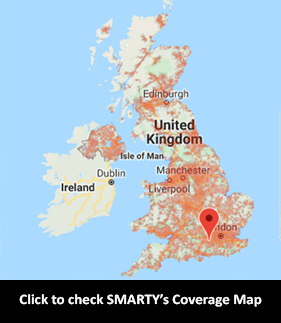 Unlike Three, SMARTY doesn’t offer 5G yet, but it’s been announced and it’s on its way.

Three has the fastest 5G data speeds and the most 5G spectrum in the UK. On top of that, the network’s 5G coverage is live in 193 cities and towns across the country, meaning their 5G coverage is available in more locations than any other UK network. Though we must underline that Three’s 5G coverage in each of these locations isn’t as wide as EE’s.

Three’s 5G download speeds average around 201Mbps, per OOKLA. O2 follows Three as the second fastest 5G network with 5G speeds averaging around 170Mbps. Keep in mind that even 100Mbps is quite fast and there wouldn’t be any issues even if multiple people were using the same connection and streaming high quality videos at the same time.

If your area has Three 5G and you can’t wait till SMARTY launches their 5G service, you can always have a look at our Three Review and discover why we rate them as the best 5G network in the UK for the time being. There are other great 5G SIM only deals on offer from other operators too.

SMARTY’s big data plans are competitively priced, you really get a lot of mobile data for cheap prices, plus you can benefit from Wi-Fi Calling at no extra cost if your device supports it. There are no credit checks or long contracts. You can also benefit from a 10% discount if you join or create a SMARTY group.

Major downsides are there’s no 5G coverage, and SMARTY’s 4G coverage isn’t the best. Not offering 2G is also a downside, but in 2021 it’s tolerable.

Can I get a discount if I have a big data plan?

Yes, you can still benefit from SMARTY’s family/group discounts. However, the money back feature isn’t available on big data plans.

Can I add more data if I use all my allowance?

No, SMARTY doesn’t offer any data add-ons. You’ll have to wait until your next billing date.

Can I combine two SMARTY promotions?

No, you can only benefit from one discount or promotion at a time with the exception of the money back scheme. If you already have a discounted big data plan or are in a SMARTY group, you can’t get another discount.

Can I get a free month on a big data plan?

Yes, you can. If you refer to a friend and they join SMARTY by purchasing a big data plan, you’ll get it for free too.