Unlimited Data for only £11 a month for the first 6 months, the cheapest unlimited data deal in the market! This 24 month contract gives you access to 5G speeds & access to Three’s reward app Three+, which includes discounts on Uber Eats and at selected restaurants.

The network is mainly known for affordable big data plans and truly unlimited data plans that come with some amazing features. Three offers both SIM only contracts and phone contracts; also, for light data users, the network provides a PAYG service.

Three has the best underlying infrastructure for 5G, but this doesn’t necessarily mean they have the best 5G service in every location.

Three is one of the four main mobile networks in the UK, this means they have their own network. They don’t piggyback on any other carrier. When it comes to coverage and data speeds, we rely on reports provided by independent testing bodies such as Opensignal, OOKLA, andmlau ut.

In Opensignal’s September 2021 report, we see that the mobile network experience of Three is ranked the worst among the four. The network advertises its 99% population coverage, but this is the case for all mobile networks be it big or small. Landmass coverage is way more important, and in this area, Three is far behind the competition.

Three’s SIM cards aren’t compatible with 2G handsets, simply because the provider doesn’t support 2G. If your handset only supports 2G, it won’t work with a Three SIM only deal.

We strongly recommend you to use Three’s Coverage Checker to ensure your frequented areas are well covered.

Three’s 4G data speeds used to be noticeably slower than other networks, but with their 5G service becoming more and more available, their 4G data speeds also improved. Three 4G is now the second fastest in the UK, behind only EE. 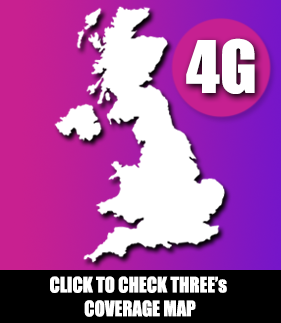 In the UK, Three has the most 5G coverage, and Three UK is improving at a faster rate than others in this area. Three’s 5G now covers 29% of the UK, providing 5G in 300 locations across the country.

Three 5G is making big strides, and the network claims this is only the beginning. They also have the most 5G users at the moment. Besides their starter SIM only deals, all Three plans come with 5G at no extra cost, including their pay as you go SIM deals.

Per Opensignal’s September 2021 5G Experience report, Three’s average 5G download speeds are around 104Mbps, and their 5G upload speeds average around 11.6Mbps. Opensignal ranks Three as the third fastest 5G network in the UK, but remember that their 5G is available in more areas, and they have the most 5G users. On top of that, 100Mbps is more than enough to stream multiple 4K videos without any hiccups. As long as you get 5G in your area, Three will deliver.

If you have a Three SIM, you can call and text over WiFi anywhere in the UK, even if you get no mobile signal. You don’t need an app, just make sure your phone supports WiFi Calling and turn it on. If your device is supported, but you don’t see a WiFi Calling option to turn on, you may need to update your handset first.

Three also offers 4G Calling (VoLTE) at no extra cost, which they call 4G Super-Voice. It’s a fancy name Three came up with for VoLTE, but it functions the same. Three’s 4G Super-Voice gets rid of many indoor black spots, helping you keep connected in areas where you normally couldn’t. Calls made over 4G are clearer and they’re also in higher quality. 4G Calling also helps you continue using your mobile internet while on a call.

You can easily create a personal hotspot with a Three SIM and share your mobile data with other compatible devices. A Personal Hotspot allows you to use your mobile data to set up a WiFi connection. Once you set up the hotspot you can connect other handsets, laptops, and other devices to this connection and use the mobile data you have. This action is also called tethering. Make sure to choose a large data plan, if you are going to tether regularly, as this burns through more data than one usually estimates. We recommend choosing an unlimited data SIM for tethering regularly.

Three Go Roam lets you unlock your call, text, and data allowance in 71 destinations around the world. Go Roam used to be included in all deals at no extra cost, but this will change soon. After 23 May 2022, to unlock your UK allowance in Go Roam in Europe, you’ll have to pay £2 per day, and when you Go Roam Around the World, it’s £5 a day. If you’re on a PAYG deal, or you started your pay monthly plan earlier than 1 October 2021, these charges won’t apply.

Three is one of the four largest mobile network operators in the UK alongside EE, O2 and Vodafone. However, it’s the only one without a 2G service. All the other networks, which aren’t tied to Three are still making use of 2G for voice calls and texts depending on the region.

The Three Network offers over 99% population coverage for 3G & 4G, but when it comes to landmass coverage it lags behind compared to the likes of EE or Vodafone.

As for internet speeds; Open Signal’s April 2021 speed test results show Three’s average 4G download speed at 19.3Mbps and upload speed at 7Mbps. The speeds are more than enough to stream content, watch videos on YouTube or play video games with friends, but nowhere near the average 4G speeds provided by EE. However, the network caught up with Vodafone’s 4G data speeds. While Vodafone still holds the second place, the difference between the two networks’ data speeds aren’t significant and in the margin of error.

Three Go Roam is subject to a fair use limit of 12GB/month. Tethering and personal hotspot features aren’t included with Go Roam if you’re not in a European country.

Three’s unlimited plans come in 1 month, 12 months, and 24 months contracts in terms of SIM only deals. Three also offers an unlimited data pack for their PAYG service, but it’s a costlier alternative. There are no speed tiers, data caps, throttling, or any other hidden restrictions. These plans are truly unlimited.

If you’re okay with not having free 5G with unlimited data, you can also check out mobile virtual network operators like SMARTY, iD Mobile and Superdrug Mobile. They’re all using Three’s network and offer similarly priced unlimited data plans. Make sure to have a look at our extensive reviews for these networks.

Super-Fast 5G At No Extra Cost

At the time of writing, Three announced that its 5G is now available to 29% of the UK. This means they’re the leaders in terms of 5G availability. Data we get from objective testing bodies also confirm this. Three 5G is quite fast, and per reports, it’s more reliable than the others in most locations.

You can find Three 5G in about 300 cities and towns in the country, and besides their starter plans, all Three SIM deals come with 5G at no extra cost.

Three doesn’t exactly offer a family or group discount, however, there are some discount options on additional SIM plans. Don’t expect much though. Existing Three Mobile customers can save about £2 a month. Considering how competitive Three’s prices already are, they may work out cheaper at standard pricing than other operators under a family discount.

You may also catch a deal or a discount for existing Three 4G Mobile Broadband and Three 5G Home Broadband customers, but there are far too few at the moment.

The mobile network operator also proposes SIM deals with student discounts, don’t forget to check them out if you’re a student or a parent to one.

Three Go Binge is no longer available and only existing customers who had the feature in the past can still benefit from it.

Three says it doesn’t want anything standing between you and your favourite shows, movies, and music. The carrier teamed up with the likes of Netflix, Apple Music, Snapchat, Soundcloud, Deezer, and TV Player to make sure customers won’t burn through their data when using these platforms.

All SIM only plans with 12GB and above data will give customers unlimited data to use on social media apps listed above at no extra cost. Keep in mind, Three doesn’t give you subscriptions to these services, only allowing you to use them without eating up your data.

Three is a great choice if you’re looking for a SIM plan with a decent amount of mobile data and competitive prices. The network doesn’t offer any fancy entertainment options or discounts, but their base deals are always good, offering great value.

If you get a SIM deal from Three, you’ll benefit from 5G, WiFi Calling, Go Roam & more.

We give Three 4 and a half stars out of 5 and strongly recommend it, especially if you use a lot of mobile data every month.

Yes, Three’s network coverage includes 5G as of February 2020. Three has the largest usable 5G spectrum amongst the mobile network operators in the UK with 140Mhz. The operator is using 100MHz of it to provide 5G coverage in the UK.

No, Three’s network coverage doesn’t include 2G. The network uses 3G and 4G for voice calls and texting.

Does Three have 4G Calling?

Yes, Three has 4G Calling but it’s under a different name. Three’s 4G Calling is named Super-Voice and free to both SIM only and PAYG customers alike.

Does Three have Wi-Fi Calling?

Yes, it does. The Three Network offers Wi-Fi Calling on all it’s plans, be it pay monthly or PAYG. It’s free of charge, but your device must be compatible.

Does Three have an app?

Yes, Three has an app and it’s quite user friendly. You can view your bills, check your allowance, sort your upgrades, have a live chat with the customer support, set a data cap and so on.

Is Three’s 5G Network really the fastest in the UK?

Yes, Three has the fastest 5G download speeds in the UK at the moment, per OOKLA (speedtest.net).

Where can I use my inclusive roaming allowance on Three?

You can use Three’s inclusive roaming allowance in 71 different destinations around the world.

Three have 99.8% 4G coverage with data speeds second to only EE. With inclusive roaming in more destinations worldwide than any other network and unlimited streaming on popular apps such as Netflix and Apple Music, Three not only gets the basics right but also leads the way with a number of unique perks in the market. The Three network is the smallest out of the big 4 operators in terms of the number of customers they have but they rank among the top in terms of their product offerings and with their incredibly competitive price point half cooked gives Three a ranking of 4/5.