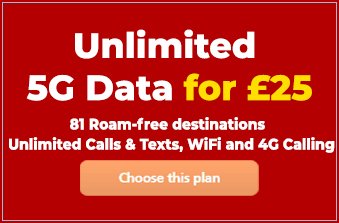 Vodafone’s best unlimited data offer ever is here! You can now grab their Unlimited 5G from Vodafone for just £25/month, on a 12-month plan.

The deal comes with great features such as 4G Calling and WiFi Calling as well as the best roaming deal in the UK. This special offer ends 27 April!

If you’re looking to join Vodafone, but don’t want to be charged for extra features like roaming, unlimited download speeds, 5G coverage, Wi-Fi Calling and/or 4G Calling, Vodafone Basics SIM Only plans might be exactly what you are looking for.

Vodafone Basics deals start from just £6 a month for 2GB of data, with a top end deal offering 100GB of data for £20 a month. The £8 deal offers 8GB of data, while the £10 plan offers 12GB of data and the £15 plan comes with 30GB of data. Compared to Vodafone RED and Unlimited contracts, Basics plans are certainly more wallet-friendly. However, as stated above, these plans don’t offer much in terms of features or extras. There’s also a maximum download and upload speed limit of 10Mbps. You can check out the table below to see what’s included in Vodafone Basics plans and what features are limited or completely excluded.

While Basics plans are a low-cost alternative to Vodafone’s other pay monthly plans, the network will still ask for a credit check as they are only available as a 12 month contract.

In the UK, there are currently five Vodafone Basics plans to choose from and they’re all 12-month contract deals. While these deals are low-cost alternatives to Vodafone’s RED and unlimited plans, you still have to pass a credit check since these are long-term contracts.

While most extras aren’t available to Vodafone Basics customers, you can still add extra data and extra 08 number minutes to your plan. Both add-ons renew automatically every 30 days and Vodafone adds their cost to your bill. You’ll have to manually cancel your subscription to them if you don’t want them to continue.

What is the difference between Vodafone Basics Plans and other Vodafone SIM only plans?

Simply put; Vodafone Basics plans are slimmed-down SIM Only deals for customers who’re not looking for all the fancy extra features. These deals rather focus on the essential things like unlimited UK calls & texts, bundled with a data allowance.

Vodafone Basics plans also come with a data cap to stop you from overspending. Vodafone Basics deals don’t include international roaming, 5G coverage, 4G Calling & Wi-Fi Calling and some of the other extras Vodafone RED & Unlimited customers get. All Basics Plans are limited to a maximum download speed of 10Mbps.

You can read our extensive Vodafone Review to learn more about all the other Vodafone deals currently offered by the network. Alternatively, we would recommend checking out VOXI’s current deals too. The mobile virtual network operator is powered by Vodafone and it operates as a low-cost alternative. Make sure to read our VOXI Review to learn everything you need to know about their offers.

If you think you can wait a bit longer, Black Friday sales are just around the corner and we’re sure Vodafone’s Black Friday SIM only deals will be worth the wait! 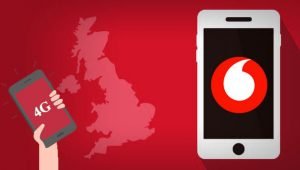 Vodafone customers with a Basics plan get over 99% population 4G coverage in the UK, but then again so do all the other mobile network customers. Having said that, what’s more important is a network’s landmass coverage, where Vodafone takes second place, following EE‘s currently unrivalled infrastructure. If you want to learn more about their offers, you can always have a look at our detailed EE Review too.

While Vodafone Basics customers enjoy 4G coverage, they don’t get the fastest 4G data speeds the network can offer. This is because Vodafone only allows a maximum download speed of 10Mbps to Basics customers. We think this is a major downside, especially given how there are many other MVNOs in the UK with cheaper offers bundled with better perks. One great example would be SMARTY. The network’s deals offer better value, plus there are no speed restrictions or any other limitations and you can use your UK allowances in EU destinations. Check out Half Cooked’s SMARTY Review to learn more! 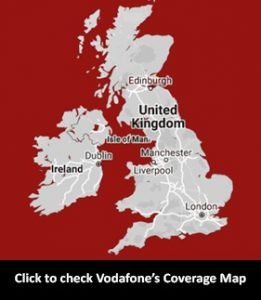 As always, we’d like to remind you that before you sign up for a price plan, always make sure to check the network’s coverage in your area. 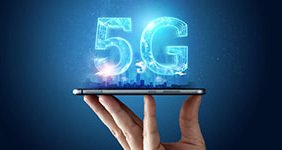 Vodafone’s 5G coverage is live in 44 locations in the UK, and there are 70 more locations in Germany, Spain, Italy and Ireland. Currently it’s hard to say how fast any network’s 5G data speeds are, but Vodafone claims their download speeds usually average around 150Mbps.

Having said that, unfortunately Vodafone Basics plans don’t come with any 5G perks. If you want to enjoy Vodafone’s 5G network coverage & data speeds, you’ll have to sign up for a Vodafone RED or Unlimited data plan. Alternatively, you can purchase one of Vodafone’s Big Value Bundles for £30 or £50, as they also offer 5G services. 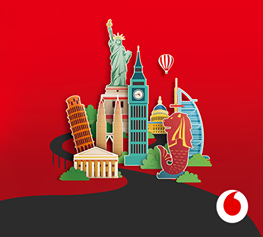 Vodafone’s international roaming deals are some of the best in the UK, and the network has great infrastructure in many other countries too. Vodafone Basics plans only work in the UK, they don’t offer any inclusive roaming options. You can only make emergency calls when abroad, that’s it.

You might want to check out our Best UK networks for international roaming guide, if you wish to buy a price plan with inclusive roaming.

Check How Much Roaming Will Cost You 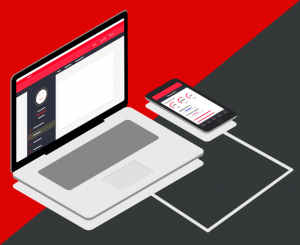 Vodafone Basics customers can share all the data they have with other compatible devices, there are no limitations or fair usage caps. All they have to do is turn their device into a mobile personal hotspot. As always, we’d like to remind you that when you’re tethering you chew up your data at a much faster rate than usual, so you might want to opt for a large data plan. Under normal circumstances we’d suggest signing up for an unlimited data plan, but sadly there are no Basics plans with unlimited data at the moment.

Setup Your Vodafone SIM for Tethering

The benefit of 4G calling is that 4G has greater bandwidth and it can carry more data than 3G. Thanks to this, 4G calling can eliminate most indoor blackspots and provide much better voice call quality.

Wi-Fi Calling keeps your smartphone connected, even when you’re not getting any phone signal. The feature makes use of an available Wi-Fi connection and utilises it so that your device can make & receive calls.

As you can guess these features are not available to Vodafone Basics customers. We would recommend either checking Three or iD Mobile’s SIM Only deals. Both carriers offer 4G Calling & Wi-Fi Calling for free, and you get many other extras. You can read our Three Review and iD Mobile Review to discover more about these networks. If you can’t decide between Vdoafone and Three, make sure to read to our Three vs Vodafone Review. 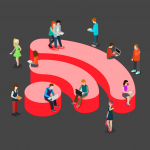 There are no exclusive free Wi-Fi hotspots for Vodafone Basics customers, but just like all the other mobile network users, they too can use O2’s free WiFi services or Sky Mobile’s The Cloud.

We’d recommend having a look at our BT Mobile Review and/or Virgin Mobile Review, if you want free Wi-Fi across the UK and abroad. Both networks offer millions of free Wi-Fi hotspots.

Can I use my Vodafone Basics plan abroad?

Can I combine a discount or promotion with my Vodafone Basics plan?

Unfortunately not. Discounts, promotions, offers or flexible upgrades are not compatible with Vodafone Basics plans.

Do Vodafone Basics plans have 5G?

How fast are Vodafone Basics SIMs?

Basics plans have a maximum download speed of 10Mbps.

I have a Vodafone RED plan/Unlimited plan. Can I switch to Vodafone Basics?

No, Vodafone Basics plans are only available to new customers and Vodafone’s PAYG customers. However, you can upgrade to another pay monthly plan from a Basics plan at any given time.

Can I add more data to my Vodafone Basics plan?

Yes, Vodafone allows you to add data to your Basics plan via the My Vodafone app or by logging in to My Vodafone via the network’s official website. Just head to Data Manager then click or tap on Data Extra.